EZ – Made with Germany! 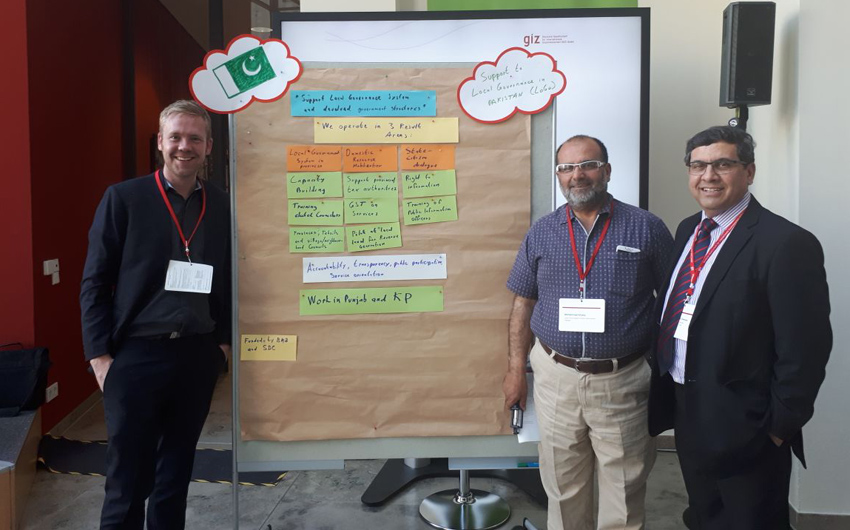 The Support to Local Governance Programme (LoGo), in particular the Resulta Area Taxation, aims to deepen cooperation and peer-to-peer learning between Pakistani and German experts in collaboration with the Structural Fund for Regulatory and Policy Reform (FSRP). The last exchange took place in mid-April when a delegate from LoGo in addition to senior tax officials from both the provinces of Khyber Pakhtunkhwa and Punjab in Pakistan visited various institutions related to taxation, revenue generation and a Network Event / Conference under the banner of “EZ – Made With Germany!”

The delegation had the opportunity to visit the VAT division of the Ministry of Finance in Hamburg where they engaged in a technical dialogue on sales tax and VAT issues in both Germany and Pakistan. Last year, the very same Experts from the Ministry of Hamburg came to Pakistan to attend a conference on the Pakistani sales tax system at the provincial level and advise Pakistani officers on how to build and manage an effective VAT system. This eventually led to change in the Sales Tax Laws of the Province of Punjab, - so a collaboration worth pursuing!

The delegation then headed to Berlin and engaged in a dialogue with a renowned expert on fiscal transfers and equalization. This is an important topic in both Germany and Pakistan, as both are federal states, where different tiers of Government rely heavily on transfers from other tiers of Governments. It was agreed to take steps to organize a conference on the issue in Pakistan later this year, once a new Government has been elected in Pakistan.

In Berlin, the delegation also participated in the above-mentioned network event where they had the opportunity to present their progresses and challenges with over 100 participants from several different GIZ partner countries.

On their final day in Berlin, the delegation visited a training academy for Government Tax Officers in Königs Wusterhausen. This is an academy which aims to prepare and educate people for lifelong career in the tax service. The delegation got a thorough overview of how the training of German officers is organized and what the benefits of rigorous and tailored education for this branch of Government Service can deliver.

At the Provincial level, Pakistan lags a little behind when it comes to training of its Tax officers, and has therefore expressed great interested in learning more from the German way in this regard. For this reason, it was decided that a larger delegation from Pakistan would visit the academy at a later stage with the aim of coming to a joint MoU which could include tailor-made courses for Pakistani officers to be delivered by German counterparts in either Pakistan or Germany, peer-to-peer learning, and more.